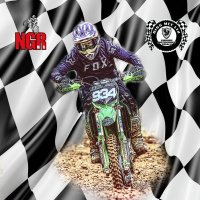 Diss MCC are hosting their second motocross meeting of the year on Sunday, 4th July, at their Wattisfield Hall venue.

The meeting includes round four of the South Eastern Evo Championships, round five of the NGR over 30's, and two groups of allcomers, featuring expert and junior graded riders.

The Evo class, mostly for pre 1990 machines, will see the series leading riders continuing their battles for the title. Brett Fisher currently leads the championship, but faces stiff challenges from Halstead's Jasom Morland, Brad Tomlin, and former national star, Jon Barfoot. A surprise entry in the Evo class is local ace, Jake Nicholls. Jake has been absent from the Britsh Championships scene this year, as he is recovering from a shoulder injury. Former 1980's Eastern Champion, and now a film stuntman, Gary Hoptrough, has also entered the Evo group.

The popular NGR series sees a full entry again at Wattisfield, where all of the leading riders will be in action. Former champion, Kings Lynn's Tim Clark, will be continuing his quest to regain the title , along with John Hinz, Mark Hunt and many more.

Luke Parker is the favourite in the allcomers class, along with fellow Norfolk rivals, Declan Whittle and Ben Cole. Reece Martin and Suffolk teenager, Will Farrow, should also be in contention.