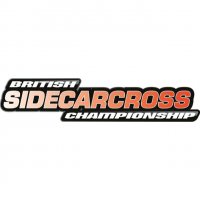 Halstead MCC hosted the fourth and final round of the British Sidecarcross Championships on Sunday 12th September 2021 at their Wakes Colne venue, plus supporting solo races.

The club members had worked hard to prepare a well groomed circuit, and were rewarded to see a decent sized crowd attending.

Race one of the twenty minute plus two lap sidecar race saw drama when sixteen times British Champion, Stuart Brown, along with long time passenger, Josh Chamberlain, retired after leading for the first four laps, when the engine seized solid. George Kinge/Chris Pannell were holding second place at the time, but were passed by Dan Foden/Nathan Cooper, and the two teams fought hard for the win, which went to Foden/Cooper at the finish. All eyes were on Jake Brown/Joe Millard however, as they had problems at the start which left them at the back of the pack. They charged through to 5th place after six laps, and were closing in on Neil Campbell/Ross Graham, when the race was red flagged when Luke Peters/Tom Glazier crashed.

There was even more drama in the second race. Tony Grahame/Zac Snell led the first lap before Brown/Millard took over at the front. Kinge/Pannell were holding on to third place, closely followed by Foden/Cooper and Campbell/Graham in a three way scrap. Stuart Brown was struggling in sixth position, riding a spare machine. The situation changed dramatically on the sixth lap when Grahame/Snell went out of second place, and Brown/Chamberlain were clearly in trouble with their ailing machine. However, once again, the race was red flagged as the leaders started their 7th lap, and on the countback rule, results were taken after the 6th lap. Jake Brown/Millard took the win, followed by Kinge/Pannell, Foden/Cooper, Campbell/Graham, with Stuart Brown/Chamberlain credited in 5th place.

Brown/Chamberlain, now back on their main machine, made no mistake in the third race, leading all 11 laps by a big margin. Brown junior/Millard got the better of Kinge/Pannell on lap 5 to finish in second place. Kinge came home in third place, with the consistent  Campbell/Graham fourth for the third time, just ahead of Foden /Cooper.

The supporting solo's were split into three groups after timed qualification, and overall victory in the A group went to Ryan Nock, who had a win plus two second places. Former expert, Adam Reeve, and Halstead club member, Harry Clark tied for second overall, with the verdict going to Reeve, who won the final moto. Ben Parry rode well for 4th on the day, ahead of Arnis Peberzs and teenager, Harrison Forde.

Colchester's Mark Gardner won all three legs in the B group, with Nathan Moulton second overall, and South African Ryan Mesk claimed third on the day. The C group saw the overall win going to Bailey Caton, who had a hat trick of victories. Shaun Tacey rode consistently for second overall, from Daniel Hawkins, Jake Robertson and Lee Keyton.