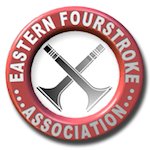 Pioneer pit at Thorrington, Essex, has been the host venue for nearly all of the Eastern Fourstroke Association's: “Thumpers trial” over the forty plus  years of its existence. The event has been renamed in honour of the EFA`s founder and former President. As the original title suggests, the trial caters for the former large capacity trials bikes of British manufacture, though for many years, lightweight UK-made bikes have been eligible.

Something of an epic, the course ran over 16 sections of former sandpit going, now greatly wooded and riddled with banks and gullies. This year's rain-starved summer, had seen much of the accustomed deep water dry up but perversely, the day of the meeting brough unrelenting rain in the early hours which completely changed the character of the trial. Perhaps as a result of the deteriorating conditions, the 3 laps set for the event – forty eight sections in total – proved physically too much for some competitors, and whist one or two sections did present riders with almost insurmountable riding difficulties, none were particularly hazardous. Nonetheless the comparatively high amount of retirement numbers, amounting to seventeen in an overall entry of fifty seven starters, was notable. One or two riders quoting: “knackered, mate, ” as the reason when they reported to this observer.  But when the going gets hardest, the hardest get going and overall, a staggeringly good ride was put in on the `Hard (red) Route` by Thomas Norman on his 185cc BSA.  to get round on just 17. Runner up and at the other end of the capacity scale, Daniel Carter (500cc Ariel)  lost a further 11marks to finish on 28.  The “fifty-fifty (green) route, which is a medium division of routes between the “easy” and hard,” was won by Kevin Plummer, (186cc BSA) on 16, this time more closely followed by Richard Snowden, (250 Firefly) on 21. Third was Jim Cammack (200cc Triumph) at 26 marks lost. Winner over the most popular, “Easy (white) route, was Martin Baker (500cc Triumph) on 34, together with  Mark Gibb, who most deservedly, took the special “girder fork”  award on his amazing and: - `older-than-him`, 250 BSA. Second was exemplary veteran, Graham Braybrooke (250 Royal Enfield ) with 41marks, and third, Josh Brown (185 BSA

It could be correctly said to be an “epic” trial and the gloomy day was made a little brighter by the welcome attendance of Ian Preedy`s widow, Sylvia. Overall, looking down on the proceedings, Ian himself would have approved. He had ridden many similarly testing events.