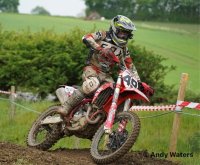 2021 champion, Lewis Tombs leads on 129 points, with two former Eastern champions close behind. Luke Parker has 127 points, and Shaun Southgate, who took the overall win at Wattisfield, is on 125.

Allrounder, Ben Cole, has 93 points, followed by Jake Nicholls and Brad Woodroffe on 75. Last year's rookie champion, Will Farrow, is currently seventh with 72. Leading expert rookie for 2022 is Bayliss Utting, who is in twelfth place after two rounds.

Event report and photos can be found here

Round three will be at Lyng on 26th June.

Our thoughts go to one of this year's expert rookie riders, Ryan Gardiner, from Essex. Ryan finished second in the 2021 junior championships, but has had a very serious accident at a recent MX Nationals meeting at Landrake. There is a money raising scheme on the Road 2 Recovery UK Charity website.