With weeks of rain on the heavy ground at Foxborough Quarry in Hedingham, the going was always going to be hard work however the passage across it was made be: it on foot 2 wheel or 4 wheel drive ! However with a full entry card of riders from across the country for the seventh running of the only Eastern Centre Extreme Enduro, the day was an endurance test for marshals and competitors alike testing their fitness strength & determination providing much entertainment to the 400 strong hardened spectators who braved the weather to enjoy the days sport.

With four classes Pro, Expert, Clubman & Trials, the staggered Le Mans Start meant that the Pro riders got a flying start after a short sprint to their cold bikes, with North Somerset MCC winner of the last 6 events Charlie Frost taking the lead over Ben Wibberley from Sidcup Club before the first bank and continued to battle it out for the 2 hour race over some 25 obstacles and individual efforts in deep mud with added rain to help Frost finish on a final lap score of 15 over Webbely's 13 with Ipswich's Jack Sheppard finishing on a hard fought and respectful 11 laps. 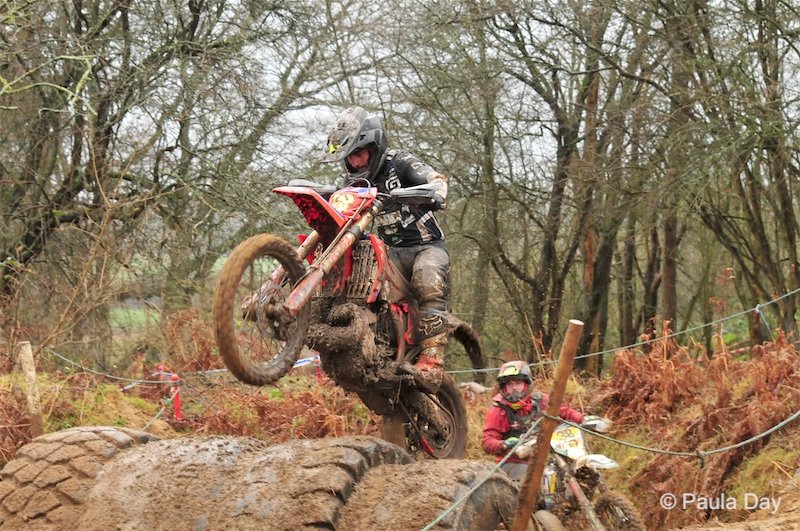 In Expert Class winner Sudbury Clubs own Stevie Roper started as he meant to continue pulling away in first place and holding his postion over his final 10 laps with Lincolnshire's Jonathan Pearson taking a final postion of 2nd after a results change with 8 laps and Chris Salt in 3rd making his journey from his home North Derbyshire club worth the drive with 6 laps.

In Clubman Class, Halstead's Michael Lyons who has enjoyed an extremely successful year on two & 4 wheels over may tracks and terrains certainly benefitted from waiting for the prize giving where he took podium after finishing on 8 laps in front of Sudbury's Keith Maude on 7 laps and the youngest rider in the adult event Callum Hughes from Northamptonshire who finished on 6 laps giving the older riders a lesson in agility over some of the more complex parts of the course. 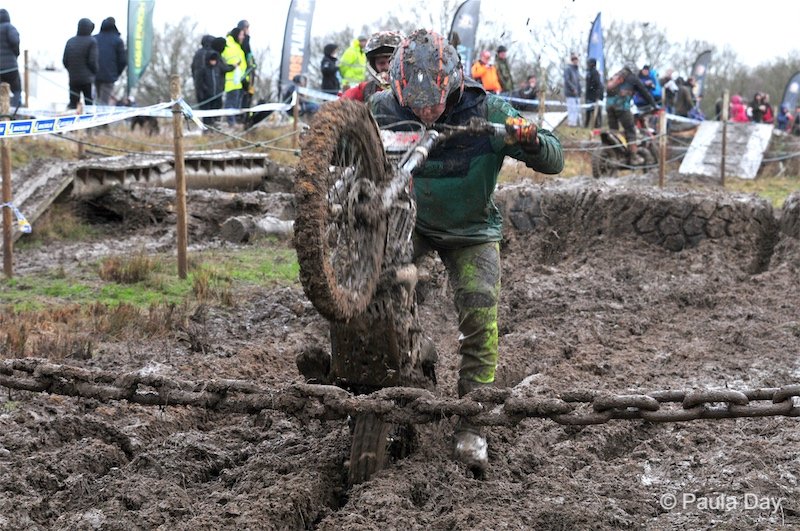 Ryan Crisp getting down and dirty!

The Trials section had Ryan Crisp fnishing with a lap in hand on 5 Laps over Ryan Vickers and Colin Brand both on 4 laps but Brand finshed some time later after a hold up on one of the many challenging obstacles.

It was with great sadness that we learnt of the passing of Chas / Tony Chaplin at the age of 84 on the 26th December. A long time Sudbury Club member holding positions on the committee including Vice Chair and Chairman and up to his passing Vice President. He will be remembered for competing in many scrambles sporting trials and later Grass track racing till Enduros and trail cross came about. Thoughts go out to his family and friends.

Before you check out the results and photos below, why not challenge yourself with another of Paula's Puzzles? This time it's Callum Hughes getting assistance from a marshal as he tries to escape the dreaded bog!