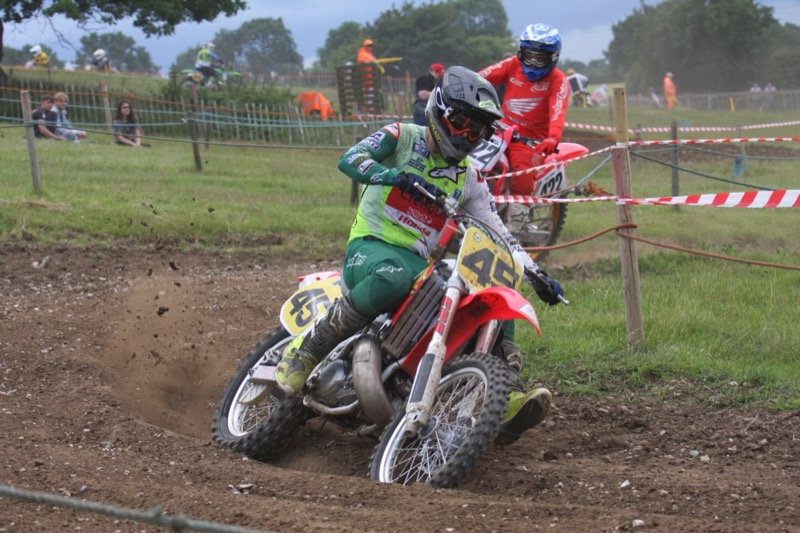 Diss MCC were the hosts at their Wattisfield Hall meeting on Sunday, which included rounds of the NGR over 30's, South Eastern Evo's, and groups of allcomers. As usual, the fast hardpack circuit was in prime condition for racing, although a heavy rainfall shower halfway through the meeting made for trickier conditions.

The Evo entry was boosted by the appearance of Jake Nicholls, who was getting in some useful track time, as he recovers from a shoulder injury, which has kept him out of racing so far this year.

Riding an immaculately prepared 500cc twostroke Honda, Nicholls took victory in all three moto's, leaving the regular Evo riders to battle for the points. Brad Tomlin got the better of his long time rival, Jason Morland in race one, with Steve Bixby claiming 4th, ahead of Gary Hoptrough and South Midlander, James Barnwell. Race two, saw Nicholls out in front again, with a fierce battle going on for second place between series leader, Brett Fisher, Tomlin and Morland. Bixby caught them up, and the crowd were treated to watch a tremendous four way scrap. Tomlin slid off on a tight off camber corner. with Fisher and Morland frantically holding off a determined Bixby, but it was Bixby who fought through to claim 2nd place from Fisher. Morland was 4th, with Barnwell and Hoptrough having their own scrap for 5th place. Meanwhile, Tomlin recovered to finish in 7th position.

Nicholls took a hat trick of wins in the third leg, with Alfie Smith initially in second place. However, Bixby soon moved into 2nd position, once again chased by Fisher, Tomlin and Morland, which was the order of finishing. Jon Barfoot rounded out the top six 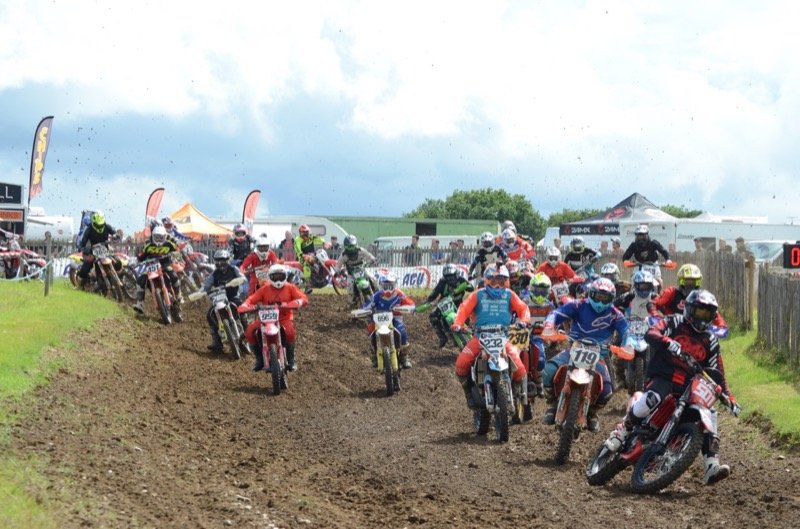 Round five of the NGR over 30's championships saw former champion, Tim Clark, increase his lead in the series by taking two wins and a second place. Lee Powell closely chased Clark in the first two legs, leaving Peter Hook and Leon Woodford scrapping over third place. After the heavy shower, the third NGR race saw Richard Roper using his enduro skills to hold off Clark throughout the race, with Woodford just ahead of Hook and Jake Morphey,to claim 3rd place. Powell had to fight through the pack, after a bad start, to finish in 8th place, which saw him 3rd overall on the day, behind Clark and Woodford.

Jake Nicholls was also invited to guest ride in the allcomers group, this time on his Crenson Fastrack Honda. Although Luke Parker gave Nicholls some spirited opposition, Nicholls won all three races.

Parker was second each time, with the consistent Ben Cole third on each occasion. Declan Whittle was fourth overall, ahead of Jack Youngs, Jordan Cutting and teenager, Will Farrow.

The allcomers B group saw Dan Lee in fine form, winning the first two moto's easily, but a bike problem when leading the final race, saw him having to retire. Sam Cushion was third in race one, and won race three, but a dnf in the second race also spoilt his overall chances. Scott Blazey took the overall win on the day, just edging out Ty Atkins, Craig Page- Baker and Shaun Tacey.